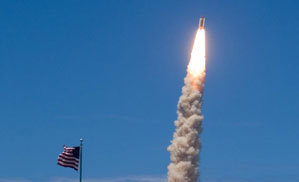 The Space Shuttle Discovery and its seven-member crew are
in orbit after the first ever Independence Day liftoff from
NASA's Kennedy Space Center in Florida.
Wednesday, the crew will use the shuttle's robot arm and
boom to survey the orbiter's heat shield, as part of continued
testing of new safety procedures. The shuttle is due to dock
with the International Space Station on Thursday.
http://www.nasa.gov/externalflash/sts-121_front/index.html